1 Dead in Attic: The Hurricane 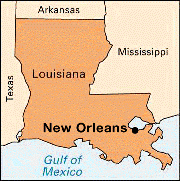 Hurricane Katrina was the costliest and one of the five deadliest hurricanes in US history. Katrina formed on August 23 during the 2005 Atlantic hurricane season and first made landfall on August 25, 2005, in South Florida, where it hit as a Category 1 hurricane with 80 mph winds. As it moved back out, increasing in strength, it left 14 dead in Florida and billions of dollars worth of damage.

Katrina next made landfall in New Orleans, Louisiana, on August 29, as a Category 3 storm with 125 mph winds. As the eye of the storm swept to the northeast, it subjected the city to hurricane conditions for hours. Katrina’s storm surge led to 53 levee breaches in the federally built levee system protecting metro New Orleans, leaving 80% of the city under water. This failure is the worst civil engineering disaster in American history. In the end, over 1500 people died in Louisiana, and the city is still recovering from the destruction left behind.